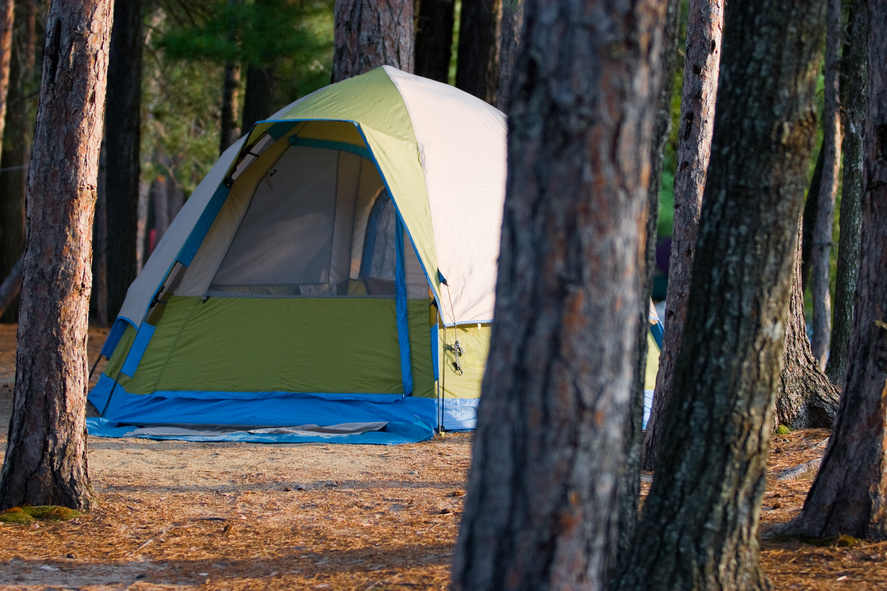 They’re almost hidden in plain sight. People live in their cars. Families stay on couches at friend’s apartments.  Couples put up tents in the woods as their new homes.

And it’s all happening far from Downtown Houston — in the suburbs.

Fr. Robert Price, Rector of St. Dunstan’s Episcopal Church in the northern suburbs of Houston, was confronted with this reality when he learned about an entire community of homeless individuals living in tents, under tarps and on mattresses in the woods across from the church.

At that moment he realized St. Dunstan’s had received a new call to serve.

“The mission had moved to us, literally across the street, and we saw them for the first time,” said Fr. Price. “And that changed everything, it really began a new phase in our discernment of what God was calling our parish to do.”

For years, more and more homeless people began to live in the area around FM 1960 and the Cypress Creek Corridor. In areas like Downtown Houston, there are organizations that provide shelter and social services to the homeless population. But in suburban Houston, there’s very little support. Leaders at St. Dunstan’s recognized this gap and decided it was time to address this growing need.

“Because it was so new, we needed to take time to discern the best thing to do here and how best to minister without a knee-jerk response,” said Fr. Price “We wanted something that was sustainable, that would make a major difference.”

For more than nine months, a church committee worked to find the best plan of action. In 2015, St. Dunstan’s held an Outreach Summit that included different churches from across the Spring area. That meeting sparked the formation of a Homelessness Taskforce. Earlier this year, the vestry of St. Dunstan’s became invested in creating the 1960 Hope Center.  Hope Center is more than just a charity-based ministry, it’s a separate 501c3, non-profit organization. After electing the organization’s board of directors and hiring an executive director, the search began for the best location for the center.

“We went to a number of strip malls in the 1960 area and nobody would allow us to do this. It was always ‘not in our back yard,’” said Deborah Johnson, president of Hope Center’s board of directors. “It could be a dying strip mall, but as soon as they heard what we were going to do, they said no.”

After several months, Hope Center Executive Director Bob Butler stumbled across the space the Center now occupies. It’s not ideal, but the building was available, affordable, and includes a shower and washer/dryer connections.

The building required massive renovations and the primary funding was coming from St. Dunstan’s. In addition, they applied for and received support from the Episcopal Diocese of Texas’s Great Commission Foundation to assist with the renovations needed.

Beyond monetary contributions, Hope Center leaders had to determine how to run this type of organization and how to best serve the population.

“One challenge the Episcopal Health Foundation has helped us with is getting us trained for the issues of the people that would be coming through the door, so the Mental Health First Aid training has been very important to us,” said Johnson. “Lord of the Streets and EHF were huge in getting us started.”

The next significant challenge — recruiting volunteers to serve. At the beginning, there was just a small group of people volunteering every day. “We began asking churches in the area for critical needs – food, resource bags, hygiene kits, and clothing because we started with nothing,” said Johnson. “But now as we’ve grown and made inroads with the churches, we are receiving more volunteers.”

In addition to faith partners, Hope Center works closely with Hope Haven, an organization which places individuals into housing. The center also works with the Homeless Outreach Team (H.O.T.) at the Harris County Sheriff’s Department. The team provides information to homeless people about resources for food, housing, jobs, health and also provides them with identification so they are able to take advantage of available opportunities.

To assist with job searches and access to other available opportunities, the center offers a mail service guests can use for their address. There’s a computer area guests can use to complete job applications and contact loved ones.

Over the coming months, the center hopes to offer enrollment in social service benefits such as Supplemental Nutrition Assistance Program (SNAP), Harris Health benefits and other programs. Longer term, center leaders are looking into the establishment of an overnight shelter and on-site medical clinic.

Through the creation of the 1960 Hope Center, St. Dunstan’s provides a valuable example of the leadership roles congregations can play in their communities by convening partners and by leveraging resources and assets available through EHF and the Episcopal Diocese of Texas. Through this effort, St. Dustan’s has been able address some of the most pressing needs in their community.

If your congregation is interested in improving your current outreach ministry or addressing a particular community need, we can help!
Contact Us